On March 22nd, AWARE  hosted a Women's Health Symposium for Active Duty Military and Veterans in partnership with Women Veterans and Families Network. Our friends at RMA (Reproductive Medicine Associates) graciously sponsored the event.  It was an evening of presentations by experts discussing key women's health issues and how they specifically impact female Active Duty Military and Veterans with a question and answer period after the panel. 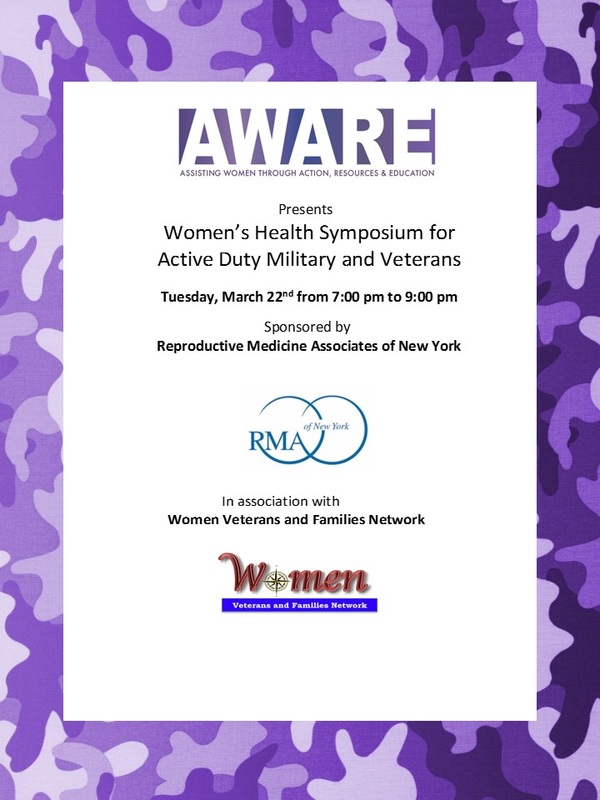 FEATURED SPEAKERS
Dr. Lucky Sekhon is a fellow in reproductive endocrinology at Mount Sinai Medical Center and RMA of New York. She will be discussing reproductive health issues facing active duty military and veterans.  Topics will range from fertility preservation to low tech and high tech treatments up to and including in vitro fertilization.
Amanda Rodriguez is a finance supervisor and expert in insurance coverage and benefits.  She will speak about understanding coverage policies and about programs available to help female veterans meet their reproductive needs.

Dr. Irina Komarovskaya is the Military Family Clinic director and a clinical assistant professor in NYU Langone’s Department of Psychiatry. She completed a postdoctoral fellowship at Bellevue Hospital and another at NYU Langone. Dr. Komarovskaya joined the Military Family Clinic in 2012, helping to establish its robust clinical program. She specializes in the diagnosis and treatment of traumatic stress, complex trauma, depression, anxiety, and relationship difficulties.  She will talk about common challenges along with some suggestions and solutions for addressing those challenges.
​
United States Coast Guard Lieutenant Commander Kerry Karwan - Chief of Contingency Planning and Force Readiness.  Ms. Karwan will be discussing the Pentagon's $150 million pilot program to cover sperm and egg-freezing for active duty troops.  ​

This year’s benefit was a Masquerade Ball -  a lavish evening of spirits and hors d’oeuvres hat benefited some amazing female veterans.  It was an evening of mystery and intrigue where guests enjoyed THE SPIN, THE PULL
​and the mysterious DEN in the back where secrets were reveled and sweets were had by those lucky enough to entice their way in. It was a conundrum, an illusion, a night of spirits and great wine, a night of reminiscing with old friends and making new ones. It was not just another NYC party, it was an experience with great purpose.  The  evening benefited courageous women who have protected us, our country and given us freedom.
Special Thanks to Linda for creating the invitation
Linda McKee
Creative Director / Co-owner of Pixelette Studios
http://pixelettestudios.com

A morning of relay races, arts and crafts, sing-a-longs, and traditional camp food that helped the girls excited about their upcoming summer at Camp Holy Child!

The documentary film tells the story of four high school students who set out to break the cycle of poverty and bring hope to their families and communities by pursuing  a college education.   It explores the problem of college access faced by first generation and low-income students and how their success has major implications for the future of our nation​.​

Angelo Ortiz - Director of School Culture, Inwood Academy
Angelo Ortiz is the Director of School Culture at the Inwood Academy for Leadership Charter School in Northern Manhattan.  He is also the current Chairperson of the UNIDOS Coalition, a partnership of 30 individuals and organizations in Washington Heights and Inwood. Born and raised in Washington Heights to a Dominican family, Angelo obtained his MSW from Columbia University (1996).  He has dedicated his career to serving inner-city youth in various capacities including clinical therapist, advocate, and community mobilization trainer.  Angelo is a member of the Coalition Advisory Committee of the Community Anti-Drug Coalitions of America.  He also serves on the steering committee of the New York Alcohol Policy Alliance where he is involved in an effort to remove alcohol advertising from the New York City Transit System. He is President of the Riverdale Nursery School and Family Center’s Board of Trustees, and he currently lives in the Riverdale section of the Bronx with his wife, Christine, and his three children: Noella (13), Isabella (6), and Lucas (4).


Mercedes Sanchez - Style Expert and Founder of BeChicMag.com
Mercedes Sanchez is a style and beauty expert, spokesperson, and the founding editor of BeChicMag.com- a blog and digital lifestyle channel covering the latest in beauty, fashion and entertainment. She shares her expertise on networks such as NBC New York, CBS, Univision and Telemundo. She is also a Cornelia Connelly Center graduate.

Dr. Arlene Torres - Director of the Chancellor’s Latino Faculty Initiative in Academic Affairs, CUNY
Dr. Arlene Torres is a tenured Associate Professor in the Department of Africana and Puerto Rican/Latino Studies at Hunter College, and Vice-President/President-Elect of the Puerto Rican Studies Association. Torres received her PhD and master’s degrees from the University of Illinois at Urbana-Champaign. She is a cultural anthropologist with expertise in Caribbean, Latina/Latino, and Latin American Studies.

- SPECIAL THANKS -
Tracy Collins, threeCeeMedia.com - Rob Hadley - Hardings Kitchen and Bar
The Saloon League Jazz Band (Lars Haake, Daniela Schaechter & Rob Duguay)  - Magnolia Cupcakes -
Purity Vodka - McCabes Wine & Spirits, RPG - Kira & Alana Copperman - Heather & Felix Baker -
Barbara & Jimmy Frischling - The Finkelstein Foundation - Arnold Karp - Josh Beckerman
This year’s benefit was a PROHIBITION PARTY - an elegant evening of food and libations.  It was not just another NYC party, it was an experience.  A speakeasy in 2014. The music, the drinks, the games, the flappers, the flirters, the mysterious VIP room in the back where stories were made by those lucky enough to get in.  It was a night of spirits and great wine.  A night of reminiscing with old friends and making new ones.   What's most enticing is that all your enjoyment not only benefited you, but the girls at Cornelia Connelly Center - young girls at risk in our community, girls who through your generosity will be given a chance to grow into healthy and happy women, women who give back to others as you have given to them.  No one left empty handed!

To wrap up our year-long partnership with Restore NYC, on Tuesday night, AWARE hosted an eye-opening panel discussion about sex-trafficking. Moderated by the phenomenal Executive Director of Restore, the panel featured sex-trafficking experts from the NYPD and the DA's office, a sexual addictions experts and an sex-trafficking survivor who shared her inspiring personal story. The enlightening evening ended with a call to action...attendees were urged to reach out to Restore to be connected to opportunities to help economically-empower survivors, advocate for better laws and volunteer at their safehouse. We ended the evening by announcing that through money raised at last year's benefit, AWARE will fund a makeover of Restore's counseling room where survivors receive their therapy and treatment. We feel so fortunate to have partnered with Restore -- a phenomenal organization assisting and empowering deserving survivors of sex-trafficking. 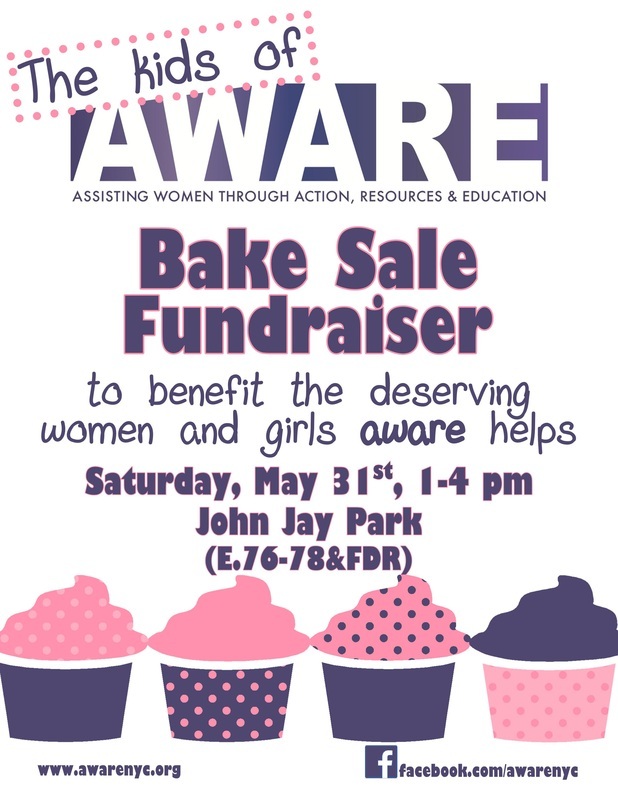 The Women of AWARE partnered with RESTORE NYC which works to end sex trafficking in New York and restore the well-being and independence of foreign-national survivors to transform their Queens safehouse.

At the event, we helped residents update their home to create a serene, safe sanctuary.  We reorganized, painted and helped them personalize their common areas and personal living spaces.

The women of AWARE would like to sincerely thank everyone who attended the Evening of Art, Tastings & Music fundraiser on Wednesday, October 23rd, 2013 at Bernarducci.Meisel Gallery to benefit Restore NYC.

The Freedom House Women's Health Fair was on Saturday, September 24th and featured a "Care for Yourself, Care for Your Family, Care for Your Future" theme with one third informative lecture, one third interactive booths and one third wellness activities.  The event connected Freedom House residents to experts in the following are﻿as:
-  health (doctors, nurses, dentists, nurse practitioners, etc)
-  mental health (with a focus on stress relief)
-  relaxation (such as yoga, meditation, massage)
-  wellness (nutrition, physical/occupational therapy) and
-  resource advocacy (social workers familiar with East Harlem).
It was an incredibly rewarding and informative afternoon for everyone involved!

AWARE organized and hosted an amazing Family Carnival for the residents of Freedom House, the country's only domestic violence shelter for disabled residents.  The Carnival featured face-painting, glitter tattoos, a photo booth, basketball, live music, cotton-candy and even an appearance by Elmo!  The nearly 135 residents and approximately 35 AWARE volunteers had an incredible time and the smiles on the faces of the children were so incredibly rewarding!

The women of AWARE would like to sincerely thank everyone who attended the Dessert, Drinks & Dancing fundraiser on Thursday, October 18th, 2012, at Bar 13 to benefit Barrier Free Living’s Freedom House.  Due to our supporters' overwhelming generosity, we raised
over $25,000 for disabled domestic violence victims and their families.